Project Description:
In the beginning of the project we went to the Meow Wolf interactive art exhibit in Santa Fe, New Mexico. When we got back there was discussion of making an exhibition similar to Meow Wolf. So we made a walk through exhibition that had philosophy and art all tied into it. During the exhibition I walked through with many people and I heard the same reaction. They were all surprised and excited that it turned out so well, and it made me feel good because there was so much stress that this project would not turn out as well as it did. But came exhibition time we were ready, and everybody's stress and worries went away. This was all because of the amazed reactions we all heard at the exhibition.
My role was in the outreach group. Our goal was to raise $1000 for the project. We did bake sales and even started a Go fund me page. At the bake sales we got close to $100-$150, at first the Go fund me page did not get a whole lot of donations, but the more we put the word out there to friends and family, the more money we got. We were able to get close to $900! It was not $1000 but it was enough to pay for a lot of our building expenses. Once the outreach group was done with their job, we started floating around to other groups and helping out where it was needed.
Project Reflection:
I think going to meow wolf, helped get our minds going about what the project needed to be. We were all so inspired by meow wolf because it was so cool, and we wanted to create something that would make other people feel the same amazing feeling and inspiration that we felt when we went to Meow Wolf. We figured that the only way we could do that was if we created an exhibition that was similar to meow wolf.
I learned that if you do not know how to communicate or collaborate with all people in your class, you are going to have some troubles. The main skills in this project that we had to use was communication, collaboration, and problem solving. If you couldn't do this you had problems getting things done in this project, because even painting a wall required you to talk to someone about it as well as collaborate with someone on how to get it done, and if something was wrong or was going to go wrong you had to collaborate with someone and problem solve with them so you could find a solution.
I believe that I did my best to give my all to this project. I wanted to see this project go off without a hitch, so I tried my best as well as my group, we all tried our best to get as much money as we could so we could get whatever we needed for the project. When my outreach job was done I went around to the other groups and helped wherever I was needed.
I think my takeaways for this project would be the communication and collaboration skills that I gained during this project. I would also take the philosophy knowledge that I gained in humanities. I don't think it changed how I view project based learning, I just think it solidified my opinion on project based learning. As far as the skills that I learned during this project, it's like I said before I became stronger in communicating, collaborating, and problem solving with my peers. 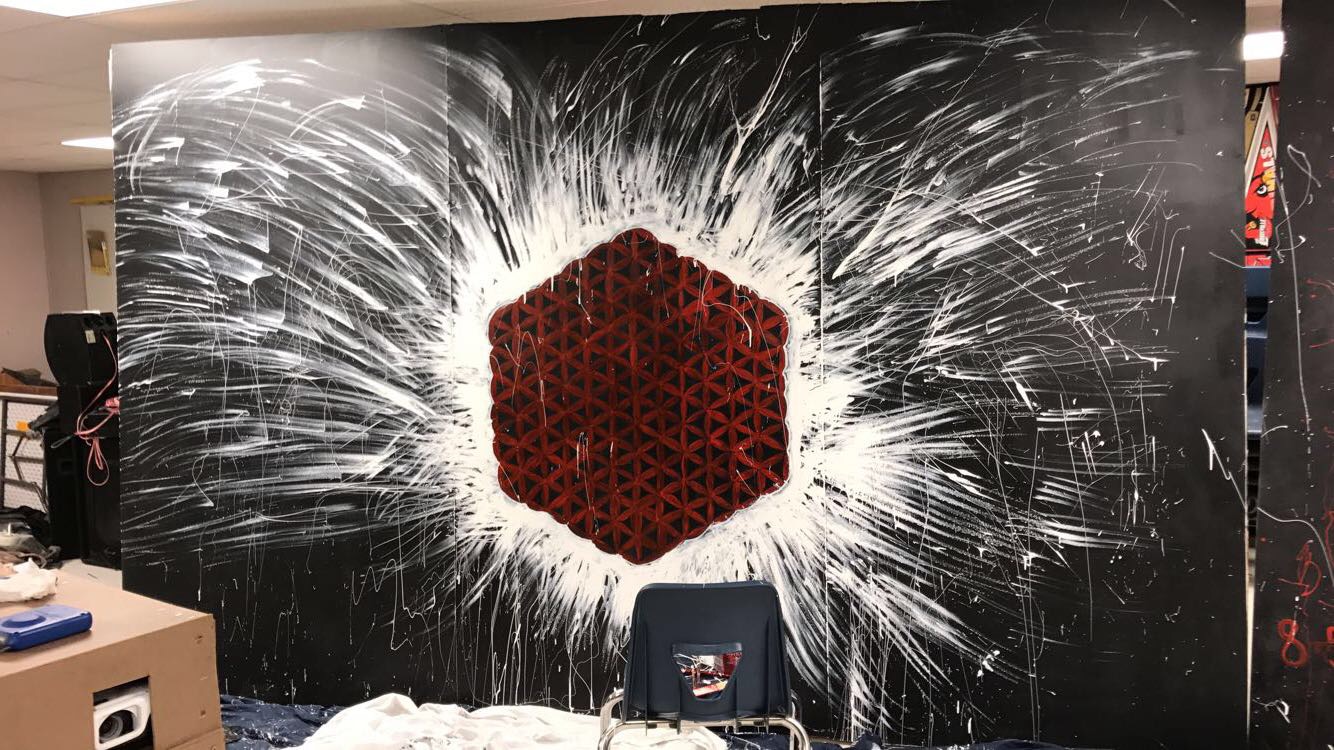 Project Description~ For this project we read the book slaughterhouse five by Kurt Vonnegut in humanities, and we read flatland in math. The point of reading these books were to give us a sense of what tie really means and to help us understand different dimensions and insane vs sane. One project that we did in math that really helped my group and I come up with our art piece idea was when we had to draw a 2 dimensional home, it was hard at first because we only see 3-D so it took us a while to wrap our heads around the 2-D life. But once we did our imaginations were expanded. 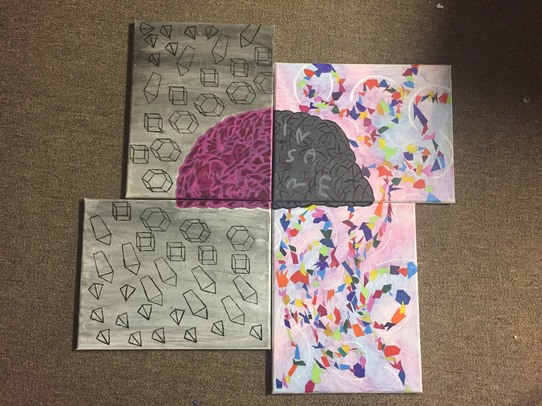 Artist Statement~ For this piece we decided we wanted to explore the theme of sanity vs insanity. It is said that “the left side of the brain is responsible for controlling the right side of the body. It also performs tasks that have to do with logic, such as in science and mathematics. On the other hand, the right hemisphere coordinates the left side of the body, and performs tasks that have do with creativity and the arts. Both hemispheres are connected by the corpus callosum and serve the body in different ways.” (Brainmadesimple.com) The two canvases on the left explore the idea of being organized in an attempt to represent a sane mind, whereas the right side goes into the craziness and unorganization of an insane mind.For the sanity side, we only included 3 dimensional shapes to express the idea that when one is sane, they see different perspectives and angles of ideas. We use the different angles of the shapes in order to make a logical decision that makes sense and is well thought out. The shapes are in order from the most sides closest to the brain and branch out to less sides the farther away from the brain they drift. Sane people don’t necessarily just see one opinion and stick with that opinion, but instead they consider every person's view of the world and concepts. The part of the brain on this side is colored to represent an active brain that sees things from the different angles and how they think in the benefit of others point of view along with theirs. For sanity we also included irregular shapes. In Flatland, the society does not accept irregular shapes and thinks they are an abomination. They are a very organized society which is a sane representation. This society goes tries very hard to maintain the order.
The insanity side only has 2 dimensional shapes to show that when one is insane they usually only see one side of things and don’t really see any other ideas or thoughts. The 2 dimensional shapes are also in specific lines and spirals to show the concept of organized chaos. In slaughterhouse five Billy is insane in his mind but he still is able to think things through. We know this because he has this idea that an alien race called the tralfamadorians exist and he wants to tell the world about them. So he thinks his process through on how he is going to the the world about this inexistent alien race.They aren't open to other people's opinions, and they stick to their point of view only no matter the consequences. This black and white point of view is shown by making the brain on this side the coordinating color.  In Slaughterhouse-Five the main character, Billy, only sees time in his eyes, he doesn’t look at how others see time, hence, why he is persistent on trying to convince the word of the new time concept and the aliens known as Tralfamadorians. These aliens are part of the fourth dimension which is time. They see time as a constant loop and that when a person dies, he is perfectly fine in many other different times on the loop. He spread this idea in many different forms such as letters, the news and radio talk shows. This obsession with these thoughts make him insane because he is stuck on only these thoughts and not thinking about how other people see things or willing to try and understand how they do. The shapes on this side are in no order or pattern and just all over the canvas and overlapping to show the chaos of one's world and even thoughts when they are insane.
-Claire Bedford, Baylee Beals, Amanda Studdard, Caeley McClain
Project Reflection~
Powered by