In this unit we learned about constraints, feasible regions, graphing, and inequalities. At the beginning of the school year I had no idea what I was getting myself into, I had never studied math like this before. I heard Feasible regions and my mind was like “what is that?” Even though I had no idea what I was doing, I paid attention in class, I interacted in the activities our teacher had for us, and before I knew it, I started understanding what to do. When I realized that I knew what to do I was so excited. Yes even though I struggled in the beginning, I have slowly begun to like math. 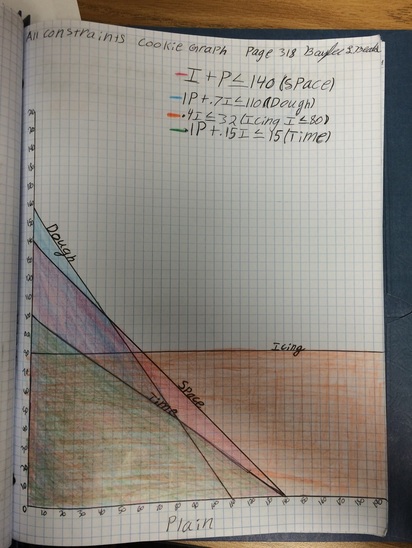 In my first semester of Algebra 1 my peers and I have learned about linear equations, graphing, measuring triangles, measuring angles, angle puzzles, and proportions. But the one that I seemed to succeed at most, was angle puzzles. I don't know why, but I find them quite fun and challenging, My math teacher would put them as extra credit on worksheets and quizzes. Dealing with angle puzzles was a fun way of learning complementary and supplementary angles. The picture below is of my first angle puzzle, as you can see they look hard, but there easier than they look. 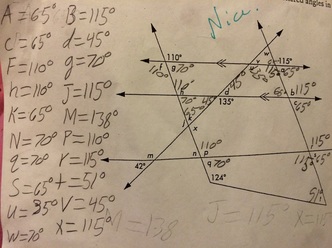 A skill that I have gained in math this first semester has been recognizing my errors and fixing them. For instance the angle puzzle in the picture above, I did not understand how to figure it out at first, so I did the best I could and wrote down what I thought was the answers, but I kept looking at them, and even though the puzzle isn't drawn to scale, you still need to think of the fact that would a 120 degree angle fit in an acute angle. No, so after I looked over it a few more times, I realized that they could not be right, so I went back and looked at my notes on complementary and supplementary angles, and I figured out the right way to solve the puzzle. Once I did it all made sense.
Powered by